12-year-old Madison Heath from Nantwich was on top form when she stormed to victory in the 138cm final of the British Showjumping National Championships held at the NAEC Stoneleigh, Warwickshire, on Thursday 10th August.

Madison stole the show in the final, finishing both first with Sonas Barney and third with Jacaloupe.  The young showjumping sensation and her trusty 20-year-old pony, Sonas Barney, 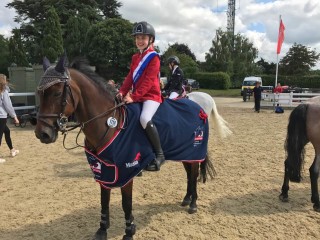 were unstoppable and finished clear in an extremely quick jump off over the 1.20m course.

Madison was delighted with her win.  Reflecting on her incredible achievement, she said: “I’ve had Sonas Barney for about a year now, he is an incredible pony and he does whatever I ask of him.  I can’t quite believe we won.  Last year he came second by just half a second and so I really wanted to take the title this time around.  It is also a great arena to compete in.”

Speaking about her second ride, Madison said: “Jacaloupe is also a really great pony and very forward going.  I never imagined I would come first and third, but I hoped that I would have a chance to win it.”

Madison is now busy making the final preparations for competing at Scope Festival next week.